Agnix is a male Unicorn Filly, who is in the middle of preparing his fireworks show for his next big party. "The bigger, the better", is something he always says, even if Bianca can get a bit worried, but she must also admit that his fireworks shows are truly spectacular. 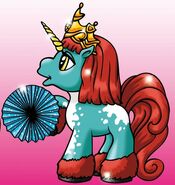 The alternative colour scheme of Agnix, as seen on the images of the early promotional photo ('Filly Unicorn: Family set')
Add a photo to this gallery
Retrieved from "https://filly.fandom.com/wiki/Agnix?oldid=16886"
Community content is available under CC-BY-SA unless otherwise noted.