Old document called Filly Fairy collection guide (found on the official site) lists Alerta as 'Lily'. It could've been her early name. And there can't be anything more fitting than a name telling about the connection filly fairys have with the nature, since some of them live in flowers. 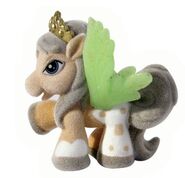