Alexandra is a character whose first appearance was a toy of 'Winter Wedding' play set.

Her name wasn't stated properly until the release of Filly Sammelband 2015. Before that time, the official media  was mistaking the names and designs of Andrew, Alexandra, Lea and Leonard. The flyers, cards, the website were calling Lea and Leonard  'Andrew and Alexandra'.

Alexandra and Andrew aren't seen anywhere outside the pages of one special  Filly Magazine's comic and the issue of Sammelband. The toys the characters received belong to the play set.

The only illustration of Andrew and Alexandra available on internet was associated with the other play set's exclusive toys - Sven and Savannah. The lack of information on the characters became a reason for this confusion. 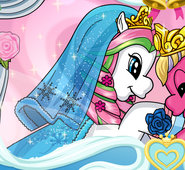 The design of Alexandra, according to the official site for Filly 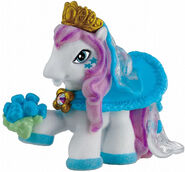 A figurine of Alexandra

An example of the mistake in naming of witchys 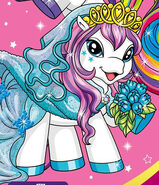 A picture of Alexandra from the 'Filly' flyer
Add a photo to this gallery
Retrieved from "https://filly.fandom.com/wiki/Alexandra?oldid=17033"
Community content is available under CC-BY-SA unless otherwise noted.