Amin is one of the characters who was updated from the Filly Princess toy line with the Filly Royale toy line.

Prince Amin is Princess Amira's younger brother. He loves to tag along Amira, even if it would mean hanging out in her lab. He is very imaginative...he thinks he is a famous scientist concocting a secret potion whenever he is in his sister's lab. He actually creates more trouble than any help at all [sic].

Sultan Amin is a male Princess Filly who is fond of summer and sunshine, and when winter arrives, he prefer to take a bath in his indoor swimming pool. Geronimo!

He is also related to 15 of the other 20 Princess Fillies, and has a 16th as his spouse. The Filly Kingdom appears as such to be a pretty family-based operation.

Amin is known by a lot of names. Perhaps a few too many. His surname, Amin, was misspelled as "Admin" on the German Family Tree of the Filly Princess MyFilly page, with the result that website structure details come to mind. The result was that almost every other MyFilly language, copied over the same mistake, leading to almost every language with a Filly Princess site spelling his name on the Family Tree as Admin, and his name on the Collections page as Amin. The only language who began to think that something was off about it was the Czech page, which renders him as Amin on both pages. The mistake was also not carried over to Filly literature, and a Russian book on Filly Princess got his name right.

Adding twice the confusion to the matter, was that the English-language Family Tree managed to misspell Sultan as "Sulta", giving him the overall title of Sulta Admin, a name that makes very little sense as a name or even as an English sentence.

A much smaller worry is an erroneous sentence structure on the Swedish Family Tree page, titling him as "Sultanen Admin". This is a problem in that adding -en to a Swedish word is a definitive form, resulting in a sentence structure somewhere akin to "The sultan named Admin". 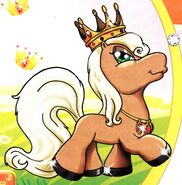 Retrieved from "https://filly.fandom.com/wiki/Amin?oldid=16567"
Community content is available under CC-BY-SA unless otherwise noted.