Bianca is a female Unicorn Filly of Festivia. During party plannings, she takes care of the decorations, with her use of magical butterflies and glitter in the air, which contributes to that she makes every party more beautiful than the last. She is worried at times about Agnix' huge firework setups, but will admit to their levels of being spectacular.

The character's toy is found in the foilbags and a 'Garden' set. For this set, Bianca has a brush and a mirror of butterfly's shape among other things.

Just like the other fillys of the re-release, Bianca appears in a new visual style. 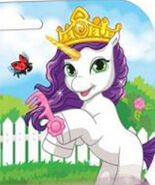 Add a photo to this gallery
Retrieved from "https://filly.fandom.com/wiki/Bianca?oldid=16411"
Community content is available under CC-BY-SA unless otherwise noted.