Cadabra is a female Witchy Filly, and the cunning twin sister of Abra. While Abra helps other Witchy Fillies, Cadabra instead loves playing tricks on them. Together, they possess the most powerful spells of Zimsala, and a very large piece of Zimsala's ceremonial duties.

Cadabra's favourite activity is playing tricks on the other Witchys of Zimsala. She wants them to stop trusting their senses, and always be alerted and looking out for Cadabra. Cadabra is so good at coming up with new ways to cause havoc that she is proud of herself because of that. She does not like helping others at all, finding it "bo-o-o-oring". There have been a select few cases where her trickery has been advantageous, primarily in comics and books, where a broom flying skill contest was won after Cadabra had cast a spell to make the winner's broom uncontrollable, partially acknowledged by Cadabra looking at the reader.

Her favourite spell is "toad slime", which makes the roads of Zimsala extremely slippery, causing other Witchys to trip and somersault into the grass, all while Cadabra is giggling nearby.

Her appearance in Filly Funtasia

Cadabra wasn't confirmed to be a character of the show but the concept art image of her was found. The witchy's design is changed and she has different colors.

The only mention of an episode she was going to appear in was its number - '15'.

A sticker by Blue Ocean Entertainment 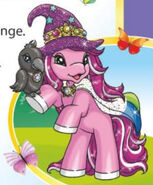 (from the german book) 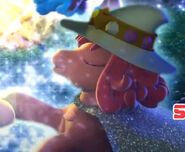 From a tv advert of the second 'Witchy' edition

Alternative design of Cadabra; the image is done in the old style
Add a photo to this gallery
Retrieved from "https://filly.fandom.com/wiki/Cadabra?oldid=16899"
Community content is available under CC-BY-SA unless otherwise noted.