Cassiopeia is an accountable and loveable queen of the Star Fillies. She is the highest-ranked currently known Star Filly, having one princess, Zodia, below her as the central family of their land.

Queen Cassiopeia, the ruler of Skylia, lives in the Rainbow Castle together with her beloved daughter, Princess Zodia. A wonderful rainbow bridge appears from the castle at every twilight. Cassiopeia often visits other kingdoms in the Filly World below in her beautiful Star Boat. 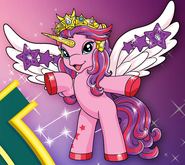 As seen on images of 'MyFilly' pages

A 'Filly Sammelband' illustration of Cassiopeia

Cassiopeia is flying together with Zodia ('Filly Sammelband') 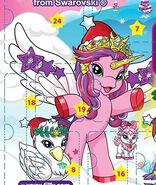 An illustration for the package, 'Filly Stars Advent Calendar'
Add a photo to this gallery
Retrieved from "https://filly.fandom.com/wiki/Cassiopeia?oldid=16591"
Community content is available under CC-BY-SA unless otherwise noted.