For the magical items seen in Filly Funtasia, see Crystals.

Crystal is the queen of the Filly Royale toy line, in which she is Prince Cedric's mother.

Crystal is one of the characters who was updated for the Royale toy line, originally being Princess Crystal, the special character of the Filly Princess toy line who was unrelated to Cedric.

She appears in the new edition of 'Filly Royale' (its name is 'Crystal'), however, Crystal is not a rare or a special figurine there. Her design features no changes to the already known design of the character. But the style the picture of her is drawn in is different.

A mystical queen from a magical land far far away. Queen Crystal is married to King Roy and is mother to Princess Rainbow and Prince Cedric. Queen Crystal knows nothing better than giving out presents --- especially precious stones and hair jewelry. She loves crystals that she actually has a collection. She is always very mysterious and enjoys appearing out of nowhere when least expected.

The image of Crystal of the new style

Princess Crystal is a mystical princess from a magical land far far away. She is always attending the big parties in the Filly Kingdom and gives out crystals and jewlery [sic] to everybody. But before midnight, she disappears just as suddenly as she came. Her first appearance in the Filly Kingdom happened a long time ago. During her first visit, a beautiful rainbow appeared in the sky. Thunderclouds changed to pink, raindrops became hearts. These were Princess Crystal's magical gifts to the residents of the Filly Kingdom. Since then she has been the kingdom's frequent guest.

Every time she visits the kingdom, she brings hefty baggage with her that usually contains jewelry and crystals. Every gemstone she gives to the residents is endowed with magic that makes its owner happy and tranquil.

When Crystal is asked about her origin, all she does is smile and keep silent. Rumors say that she lives in a castle fully made of diamonds and that she can read others' thoughts. Who knows?

Her Hungarian name is shared with the Filly brand's mascot, Filly. 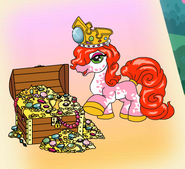 Add a photo to this gallery
Retrieved from "https://filly.fandom.com/wiki/Crystal?oldid=16686"
Community content is available under CC-BY-SA unless otherwise noted.