View source
watch 01:36
We're Getting Mutants in the MCU - The Loop
Do you like this video?
Play Sound

Filly Butterfly is one of the two planned specials of Filly Funtasia; It's based on the toy line of the same name.

This special episode would be of 75 minutes long, created and distributed by Dracco, BRB Internacional, Screen 21, and Apollo Films.

There's no news on the episode's current state, it may be possible the special would not be produced unlike the other episodes of the show but it's unclear now. However, 'Filly Butterfly' still may be the one of episodes which would receive the chance to be created.

The first news about this special appeared in 2016 when the pitch bible of the show was found on internet. The presentation is the only source that mentions the special.

The only images of this special are seen on the pitch bible's pages.

'As Funtasia prepares for the seasonal Change of Color Festival, Rose, our heroine, accidentally meets Alyssa, a Butterfly Filly that comes from the distant mythical realm of Papilia. It is true... Butterfly Fillys exist! But... ... but they must remain secret so Rose helps Alyssa hide and the two become instant friends. Little do they know that their over-confidence will end up revealing Alyssa and unleashing the greatest threat Funtasia has faced in centuries'.

The text was taken from the pitch bible for the show and may be outdated. 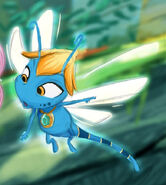 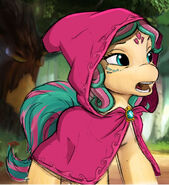 Alyssa in the forest 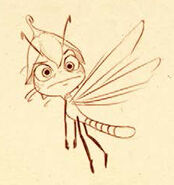