Filly Funtasia -  is an animated comedy (the official sources named the show's genre being 'a sitcom' or a family comedy)  series, based on the long-lasting Filly brand. The plot follows Rose, Bella, Lynn, Cedric, and Will's experiences and adventures while attending the Royal Magic Academy.

Although Filly Funtasia was made in English, its creation was helped by various groups around the world, including the company BRB Internacional (Spain) and the animation studio Black Dragon Entertainment (Beijing). Despite Filly's massive popularity in German-speaking countries, no German parties are currently known to be involved in the production.

The show was originally announced to be released in 2014, but suffered years of (largely unexplained) delays before finally being released in early 2019.

'Filly Funtasia' was going to have two special episodes centered around the stories based on 'Filly Butterfly' and 'Filly Stars' canon but after BRB Internacional and Screen 21 quit working on the development and distribution of the show, there was no word on the current state of the specials. The specials would be of 75 minutes long each and would feature characters who are exclusive to each of the toy lines, including Zodia and Alyssa. The only existing information about these episodes can be found on the pitch bible's pages.

The show had its own dedicated site created in 2013. However, it was taken down early 2019. All the information available on it before its removal was taken from a pitch bible for the show.

The site had descriptions and images of the show, including concept art pictures. Some of the images could be misplaced between the episodes and the early titles of several episodes of the show could be seen on the site, such as 'Liar, liar, prance on fire', 'The missing student' and 'Wranglum goes fillying'.

B-water is the animation studios that would later take the show for its projects, being working on scripts, storyboards, designs, animation supervising and post supervising of  'Filly Funtasia'. They helped to finish the episodes Studio 21 started to work on in the past. One of the trailers uploaded on their Vimeo channel has a scene not known to appear in any of the existing episodes. Another new company to currently work on the show is Guangzhou Huamai Animation Studios.

Imira Entertainment is the new distributor of the show. This company signed the deals of creating hungarian, romanian, czech, serbian and slovenian versions of Filly Funtasia which are expected to become a part of AMC TV channel's airings, Minimax.

The official section of PlusPlus' site has a description for the whole show. Here is a translation of some parts of its text:

'In the center of this story there is a little Filly who is telling her friend Rose a story about the magical Academy in the fairy tale kingdom. While they are busy at the magical school learning about their crystals' (this text uses the adjective 'crystal like' so the meaning of this part is unclear) magic, a trouble came. Wranglum who is a wizard of the Dark Crystal, has an intention to take all the magic of the kingdom. Cedric, Isabella, Lynn and Willow are the loyal friends who are coming to help. Will they be able to defend the world and themselves?'

'The little unicorn horse named Rose is attending Royal Academy of Fantasy's kingdom together with her friends, to learn how to control the crystal magic (?). Wranglum, the wizard of Dark Mirror who is dreaming to steal all the magic of the magical world, will become the main villain.' [5]

There's a russian translation as well and its text is the same as the one of ukrainian's version. [6]

The description from ETS licensing site

English version: 'Filly Funtasia tells the adventures of Rose and her friends at the Funtasia magic academy. The Fillys go to school and study crystalline powers, while Wranglum, the Wizard of the Dark Mirror, along with his servants Battiwigs, try to steal all the magic in the kingdom'.

This description mentions two formats of Filly Funtasia - 26 episodes of 22 minutes and 52 episodes of 11 minutes. It's saying the show is made for children of 5-10 years old, and of a most focus on girls. As the site and company are of an italian origin, the text is telling about 'Filly Funtasia' being broadcasted on Frisbee channel.

'At the royal Magical Academy of Funtasia anything is possible, and everything is fun, but danger is also lurking just around the corner. Rose and her filly friends soon realise that they’re new magic skills will come in very handy as peril is near'.

This text mentions the series would have twenty six episodes, each would be thirty minutes long. The genre is 'sitcom with adventure' and the information about possible audience's ages is known: the site says 'Filly Funtasia' is for kids of 4-7 years old.

'Rose and her friends attend the Magic Royal Academy of Funtasia. The Wizard of the Dark Mirror and his comical minion Battwigs, try to steal all the magic in the kingdom. Despite their wacky attempts - At the end all the Fillys discover their unique and magical crystal powers in these coming of age stories'.

The series is described as one having 26 episodes, each episode is of 23 minutes long.

From the official pitch bible of the show

'The Filly animated series brings to life the charming adventures of Rose and her friends as they attend the Magical Royal Academy of Funtasia.

Wranglum, the powerful wizard imprisoned in a mirror eons ago, and his comical minion Battiwigs, try to steal all the magic in the kingdom and plan to spread evil in revenge - once the wizard can esccape the crystal prison, that is.

Despite their waky attempts, the Fillys enjoy every day school life, studying and discovering their unique, and magical crystal powers in this coming of age stories'.

The concept idea of Filly Funtasia:

'...' As our series begins, the magnificent Magical Rainbow Stone hidden on Funtasia is shattered  and scattered across all the vast Filly realms. Fortunately, each of our five (...) heroes already has one unique magic Rainbow Crystal in his or her Royal Crown, which will help guide them as they hunt for the missing crystals, while racing to retrieve them before the evil Wizard can'.

The text of this description may be outdated as it was written in the early days of this show's development.

Gallery of the promotional pictures

The second advertisement of the show, being seen on its site 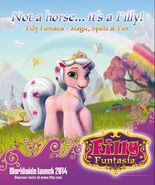 One of the earliest posters 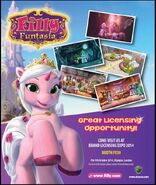 Advertisement from the magazines

Banner of 'Imira Entertainment' section for the show 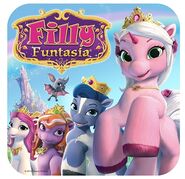 From B-water's page for 'Filly Funtasia', version with no logotypes

English version of banner, from 'brb.es' 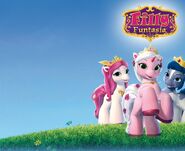 From 'brb.es' page for the show, third background image 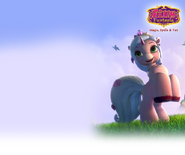 A better quality picture of one of the posters seen at BRB's stand.

The first logotype of the show 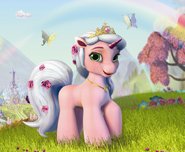 From the promos of 'Filly Funtasia' 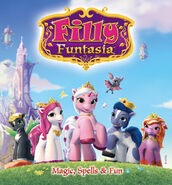 The most common poster of the show.

One of the sketches for a poster

This sketch for the poster of 'Filly Funtasia' is highlighting Rose

The first version of the poster 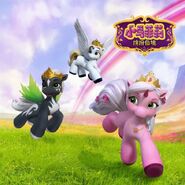 One of the chinese promos featuring unique renders of characters

Second version of the poster, note the absence of Battiwigs 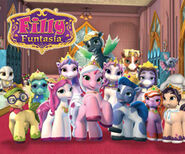 The thumbnail of this poster (Imira)

One of the chinese posters for the announcement 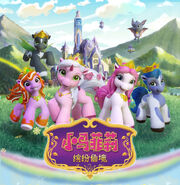 Another spanish logline of the show, from the site of Screen21 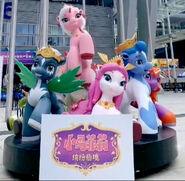 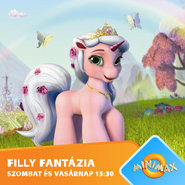 The earliest advertisement of fillyfuntasia.com
Add a photo to this gallery

Retrieved from "https://filly.fandom.com/wiki/Filly_Funtasia?oldid=17692"
Community content is available under CC-BY-SA unless otherwise noted.