View source
watch 01:36
We're Getting Mutants in the MCU - The Loop
Do you like this video?
Play Sound

The Filly Funtasia writing system is a set of letters or signs that are used in certain settings at the Royal Magic Academy. Nine letters are known, of which eight of them form part of a writing system not resembling any of Earth's languages. In Filly Funtasia, those eight characters are only seen in two instances: On the monster posters at the beginning of the October 2013 trailer, and on a map hanging on a wall in the October 2013 and April 2014 trailers.

The letters are currently not known to have connections to any sounds, pronunications, or local languages. It also have no known system of punctuation, commas, pauses, or reading aids of any sort. The three sentences known to exist, were all written as one word, meaning that even spacing is currently unknown of.

The letter F is used on stamps and symbols of the Royal Magic Academy, strongly resembling the F of the various Filly logos and as such the Latin alphabet. One letter also bear some resemblance to the Chinese letter 乙 that is in common use in Chinese-derived writing systems, and that has a different pronunciation in every one of them.

Two letters have dots that are unconnected to the rest of the letter, making the use of wovel diacritics, or abjad-style wovel pointers, technically possible.

The letters are typically written in such a way as to have uneven thickness in a letter's strokes, which is not shown in the example picture above, and that resembles formal grammar of several non-Latin writing systems, such as Japanese, Chinese and Arabic.

It is only known to have been used at the Royal Magic Academy, and is far from being everywhere where a writing system would be used in most human societies, but the book covers have writings in the fictional language's text sometimes. 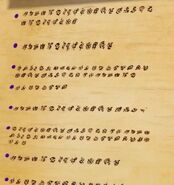 A blackboard's writings, as seen in 'The magic maze'

The letters on the pages and covers of books ('Teacher for a Day')
Community content is available under CC-BY-SA unless otherwise noted.
Advertisement