Start a Wiki
Filly Princess introduced the concept of Swarovski decorations in the toys.

In 2016, the Filly Royale toy line was created, using many existing characters with updated bios and family structures and introducing brushable tails to the normal figure design. With this alteration, it may be that Filly Princess is no longer an active part of the Filly continuity.

'On a magical island far away, the Filly Princesses wear beautiful crowns of sparkling gold and bright crystal'.

From one of 'Filly' Deviantart pages 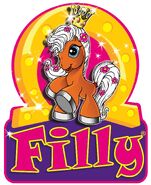 Updated classic logo from 'Filly' bedding set; also appeared in the images of 'My filly De' page of Facebook and was used to advertise 'Filly Royale' later

Retrieved from "https://filly.fandom.com/wiki/Filly_Princess_toy_line?oldid=16753"
Community content is available under CC-BY-SA unless otherwise noted.