'Filly Stars' is one of the two previously planned special episodes of Filly Funtasia. Its length was of 75 minutes. The companies involved in the making and distribution of the special were: Dracco, BRB Internacional, Screen 21 and Apollo films.

Information about this special was given in 2016.

Its description may be severely outdated because it was written in the time when Filly Funtasia was in the early stages of development.

There's no confirmation as to whether the special will be produced and aired or not, but it is known the episode has the first description (the synopsis) and the concept art images.

Zodia's companion, Aero, is seen on the early images of this special.

The pitch bible shows the first designs of Zack's father who was planned to appear in the special.

'High above the Filly World, in Skylia, live the Filly Stars. The sky kingdom has been split into two realms due to a long forgotten conflict between the Moonlight and Starlight Fillys. Zack, a Moonlight Filly and Zodia, a Starlight Filly, share a forbidden friendship.
When Zodia comes to Funtasia looking for Zack it sets off a set of events that creates a rare "purple moon" whose evil light plunges all of Funtasia into chaos. Can the two kingdoms set aside their differences to restore the balance of magic before the evil lord Wranglum is set free?' 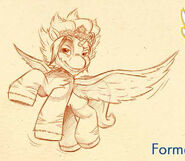