A multi-Filly-type series that sold the figures in pairs. Each character is paired with the same Filly type of the opposite gender sharing the same first letter of their name (with the exception of magazine exclusive fillys known as Naomi and Julian).

A Winter Wedding play set exists featuring a reindeer-drawn carriage and Lea with Leonard, who (just like Sven and Savannah) weren't identified by the community of fans in the past.

A Mermaid couple (Simon and Stephanie) was added by the Filly magazine in 2015.

The differences from 'Winter wedding':

This name is seen in the text of the german 'Filly Magazine', namely, its special issue called 'Filly Fun' (3/2014). The illustration of the mascot Filly looks different compared to the first 'Wedding' image, and the background of this logotype (as seen on 'Wedding' part) is blue instead of pink. However, this change isn't present on the package of every play set of 'Dream Wedding' toys.

Images of this toy line

'Wedding card', side one - Oliver and Octavia 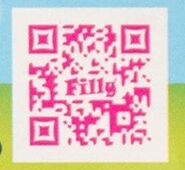 An example of 'Wedding' QR code.

Third logotype of the toy line, as seen on 'MyFillyDe' Facebook page
Community content is available under CC-BY-SA unless otherwise noted.
Advertisement