The magazines were produced by Blue Ocean Entertainment, aimed at children and featured Filly-themed comics, puzzles, recipes, posters, and more. In some cases they were also used to foreshadow upcoming areas, e.g. before the Flower Tower's release, a Filly Butterfly magazine featured a map of Papillia with the addition of a sparkly outline showing where the new area would appear.

The magazines also came with items, including exclusive Filly characters.

Eventually met its probable end after October of 2021, which was confirmed by lack of any announcement date for next issue on its pages, no update to the page on Blue Ocean's site (and later - partial update to include images for special issue of Lissy), and letters its subscribers received, offering to switch to any other magazine or cancel the subscription.

There were ten variants of Filly magazines published in Germany:

Gallery of images for variants of the magazine 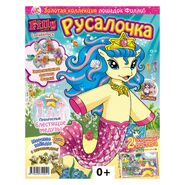 Last picture that helped to find the magazine on Blue Ocean's site; change made in late 2021