Gaia is a female Unicorn Filly, who spends most of her awake hours daydreaming. Some say, that the wonderful things that Gaia dreams about when she sleeps, gives everyone all over Crystalia sweet dreams.

She was mistakenly referred to as 'Гала' ('Gala') in one of the russian magazines (this volume dates to 'April of 2014').

Gaia appears as a character of ordinary foilbags and a 'Garden' set. Her figurine comes with the flowers and a pink mirror (in a butterfly shape). This filly is drawn in the new visual style as well. 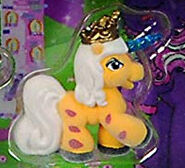 The toy of an early promotional photo; Gaia received several red spots for her design
Add a photo to this gallery

Retrieved from "https://filly.fandom.com/wiki/Gaia?oldid=16887"
Community content is available under CC-BY-SA unless otherwise noted.