Karus is one of the characters who was updated from the Filly Princess toy line with the Filly Royale toy line. Prior to his massive redesign, he was an emperor.

Prince Karus is a jolly prince. He is the famous masseur of the Royal Spa. He is much known not only for his massage but also for his generosity. He loves to make and share tea with their customers at the spa, while telling them stories of his family tree, all being famous masseurs in Royalia. 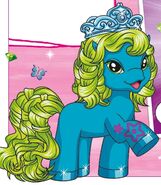 The picture of Karus from german magazine 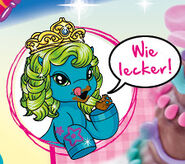 Emperor Karus is especially proud of his ancestors and finds it enjoyable to look at the big poster of the family tree of Princess fillys often.

Although Karus' Russian name looks like "Kapyc", those are Russian letters (Cyrillic script) and his name is still pronounced as "Karus".

The gallery of Karus from Filly Princess 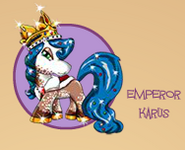 Retrieved from "https://filly.fandom.com/wiki/Karus?oldid=17405"
Community content is available under CC-BY-SA unless otherwise noted.