Unchecked translation. We take no responsibility over whether the joke is actually funny or not, unless it was translated that poorly.

(Familie und Freunde) Family and Friends:
Loki's parents are Bianca and Agnix. With them and his sister Samba, Loki regularly celebrates wonderful parties in Festivia.

(Sein lustigster Witz) His funniest joke:
A mouse was at the beach. Suddenly an elephant shouted, "Get out of the water!" The mouse looks at it and is told, "I only wanted to see if you're wearing my pants."

Other appearances of the character

Loki is a filly of the 'Filly Unicorn' re-release produced by Goliath.

He has a version as a 'Ballerina' filly as well. The group Loki belongs to as a Ballerina, is 'Topaz'. The character crown's gem is still yellow with additional clothes being a blue cape and special yellow-colored shoes.

Loki had a light blue colour of his body.

Judging by the gem and horn's colour, he could belong to Amoria instead of Festivia.

The horn of Loki looks slightly different, including the pattern which appears somewhat similar to drawings on the horns of Star fillys.

This version can only be seen on artwork of officially released puzzle by Noris.

His Ballerina version (a toy form) 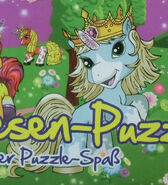 Earlier design
Add a photo to this gallery
Retrieved from "https://filly.fandom.com/wiki/Loki?oldid=17303"
Community content is available under CC-BY-SA unless otherwise noted.