Lori is one of the characters who was updated from the Filly Princess toy line with the Filly Royale toy line.

She is Magica's best friend.

Princess Lori is Princess Pretty's styling assitant [sic]. She is usually seen around Royalia having different hair styles too often that it was not difficult to impress Princess Pretty that she could be the best assistant in Royalia [sic]. Priness [sic] Lori is a very cheerful Filly. She brings fun in the hair salon for being silly at times. She can come up with the silliest jokes in Royalia. She always looks forward to the monthly hairstyling competition!

Lady Lori is a female Princess Filly, the youngest Filly alive out of the Filly Kingdom's 21 (or 22) residents. She spends the majority of her time in her bower[1] where she is studying and reading books. She particularly like fantasy books, as it apparently wasn't enough to already live in a fantasy book world.

She has ambitions of marrying a famous writer one day. That would limit her available selection hugely, unless Alice gets around to finishing her novel-in-works. 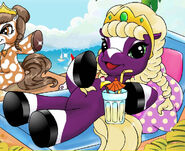 Retrieved from "https://filly.fandom.com/wiki/Lori?oldid=16574"
Community content is available under CC-BY-SA unless otherwise noted.