Magic is a Fairy Filly, and is the main line rarity of the Filly Fairy toy line. Unlike most Fairy Fillies, he has a horn, like that of the Unicorn Fillies, and white wings, a rare trait also shared by his sister Miss Magic. He is stated to be a "real" unicorn, despite him, or perhaps because of him, preceding the Filly Unicorn toy brand.

He does not reside in the Magical Land, and only visits it once a year on a sailing ship. Princess Scarlet's travel schedules seem reasonable in comparison.

The ukrainian commercial of Filly Fairy calls Magic 'a unicorn princess' which could mean he was mistaken for a girl. 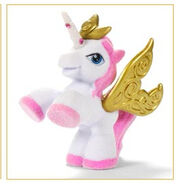 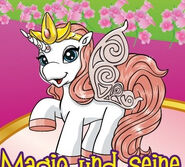 Add a photo to this gallery
Retrieved from "https://filly.fandom.com/wiki/Magic_(character)?oldid=17319"
Community content is available under CC-BY-SA unless otherwise noted.