The Moonlight region is referred to in the descriptions of some Star Fillies. The main way to get there from mainland Skylia is through the Rainbow Bridge, though a door in the House with Many Doors may also lead there. Prince Zack resides here, alongside a group of Moonlight Fillys. It is home to a large castle with an observatory at the top, which as of 28th of February 2015 is shrouded in a blue mist. Grass and flowers generally have more intonations of blue, as opposed to the more regular flora of the mainland.

Due to reasons no one remembers, it is currently considered a foreboding place by the other Fillies of Skylia, who will only go there to collect rare crystals. The story on the MyFilly site implies that Zack and Zodia's increasing friendship is combining the Moonlight and mainland areas tighter, and could be the key to reuniting Skylia into one kingdom.

One of the Filly magazine's comics ("Achtung, Notlandung!") starts with four members of the Moonlight family in the "Himmelswarte", which appears to be an observatory. As an observatory can be seen near the uppermost part of the Moonlight region's building, it's possible that this region also has its own separate subregions. The MyFilly Facebook page later uploaded an image with Zack and the 'Moonlight Observatory'. 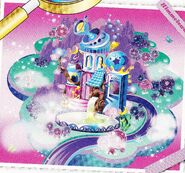 Without the blue mist 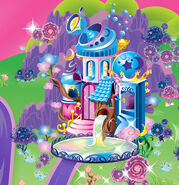 A version which can be seen on the wallpapers of 'MyFilly' (fanpop)
Community content is available under CC-BY-SA unless otherwise noted.