Pretty is one of the characters who was updated from the Filly Princess toy line with the Filly Royale toy line.

She owns the Hair Salon.

One of her russian names means 'The cute one' (plush toys of her are named like this).

Princess Pretty is the owner of the famous hair salon in Royalia. She loves to style her hair and everyone else's hair in Royalia. She finds true happiness in creating pretty hair styles and making everybody look and feel special. She especially loves putting glitter on the hair! She believes that beauty is the best charm!

Information of the magazines

Russian version of 'Filly Magazine' contains a short biography of her:

The group she belongs to is: Tanzanite.

Her talent is: creating marvellous hairstyles using the skills and magic.

The best friend of her is: Princess Rainbow.

Princess Pretty is Cedric's and Princess Jade's younger sister, and is fond of playing pranks on the two of them. Despite being that young, she has specifically dreams about marrying a prince who is from a "strange and mysterious land" in the very far east. 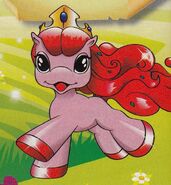 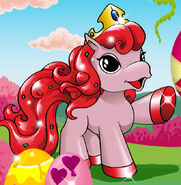 Add a photo to this gallery
Retrieved from "https://filly.fandom.com/wiki/Pretty?oldid=16577"
Community content is available under CC-BY-SA unless otherwise noted.