Rainbow is a female Royale Filly. In the Filly Royale toy line, she is Prince Cedric's sister.

Princess Rainbow has the longest and most beautiful tail in the Royalia kingdom. She is the most popular and kindest Filly in the entire kingdom. She loves to parade, showing off her colourful rainbow tail. She is everyone's best friend! She finds happiness in throwing parties in the Rainbow Twin Tower. She hosts the monthly hairstyling competition and invites everyone by sending out magical crystals.

Rainbow is drawn in the new visual style, from the illustraitons of the package for 'Filly Royale Crystal edition' 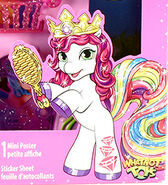 In a new style 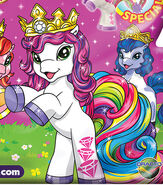 An image from the foil bag's package illustration; Rainbow is drawn in the old style of 'Filly' 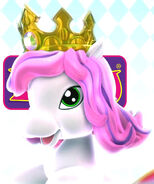 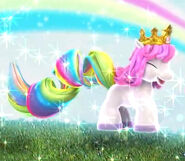 Add a photo to this gallery
Retrieved from "https://filly.fandom.com/wiki/Rainbow?oldid=16680"
Community content is available under CC-BY-SA unless otherwise noted.