Romantica is one of the characters who was updated from the Filly Princess toy line with the Filly Royale toy line.

Princess Romantica is a hopeless romantic. She loves to read the love stories of Princess Heart. She is Heart's no. 1 fan! She is often seen daydreaming beneath the trees of Royalia, wishing for her prince charming to come! She thinks Prince Amin is quite cute!...now if only Prince Amin would notice her....

Drawn in the new style
Add a photo to this gallery

The text of the russian magazine is telling us that Rose is a part of Romantica's family.

Duchess Romantica is a female Princess Filly. She lived her early life somewhere in the nature of Britain, but fell in love when Duke Linard was on a particular visit to Britain, leading her to join him on his way back to the Filly Kingdom, where they have lived in the Castle of Taliesin ever since. She still makes a visit to her parents back home once a year.

While Filly Forest and Filly Beach Party had a long number of Fillys who grew up in Great Britain, especially if going by Forest's first-release canon, Romantica is the only known Filly in the currently thought-of Filly canon to come from an Earth country. 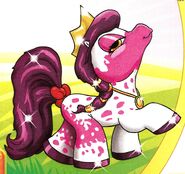 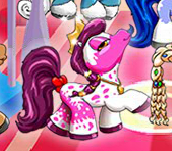 Add a photo to this gallery
Retrieved from "https://filly.fandom.com/wiki/Romantica?oldid=16572"
Community content is available under CC-BY-SA unless otherwise noted.