Snow Princess is one of the characters who was updated from the Filly Princess toy line with the Filly Royale toy line.

Although her location is given as the Hair Salon, she owns the Royal Spa.

Snow is released as a toy for the newest edition of 'Filly Royale', she is an ordinary filly who is not rare or special, and the visual style she is drawn in is a new style of 'Filly'. The design of Snow being featured in this edition doesn't have any change when compared to any other 'Royale' version of her.

Snow Princess loves ice and frost. Every year on the first day of snow, she is the first one outside, rolling in the snow and throwing snowballs at everybody. She sometimes makes snow indoors by mistake...even in the Royal Spa which she owns.

From the cover of 'Filly Magazine'

Snow Queen (or Queen Snow) is the ruler of the north-eastern region of the Filly Kingdom. In pursuit of making her subjects happy, she came up with the Snow Medal - a reward that is given to any filly who manages to invent something useful or marvelous for the kingdom.

As soon as the winter comes, Snow's subjects should be cautious, since Queen Snow starts to act very child-like: she builds snowmen and rides her sled from any, even the smallest, hill. The queen's favourite activity is snowball fights, and the first snowball of the winter is always thrown at her husband, Sulta(n) A(d)min. 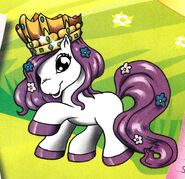 Appearance of Snow in the old visual style of 'Filly'

Retrieved from "https://filly.fandom.com/wiki/Snow_Princess?oldid=16568"
Community content is available under CC-BY-SA unless otherwise noted.