Squeak is a fisherman. He can usually be found at the magical lake, watching the stars' reflections twinkle in the water. He loves his two daughters - Gaia and Luna - and often calls them to fish together.

Squeak appears as a character of the renewal of 'Unicorn' toy line, along with both of his daughters. All of them are 'Garden' set's fillys too but the three aren't together and come in separate packs with one name.

He's an ordinary filly of the newest release which means his figurine is found in the foil bags as well.

Illustrations of the character are present in a new visual style. His design wasn't changed.

With a rod, sitting on the clouds 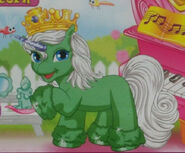 Squeak in the newest style of 'Filly' 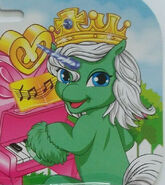 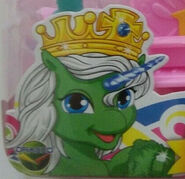 Smiling Squeak (new style)
Add a photo to this gallery
Retrieved from "https://filly.fandom.com/wiki/Squeak?oldid=17352"
Community content is available under CC-BY-SA unless otherwise noted.