Start a Wiki
The Star Palace is home to the Filly Sunlights and also the magical entrance to Skylia. Its lake is the harbour in which ships, boats, and other vehicles of free choice are docked, and it is required to go through the impressive halls of the palace to reach Skylia proper. It is also host to the west end of the Rainbow Bridge, which leads to the Moonlight region in certain amounts of time each day, but the Bridge is increasingly staying active for increased amounts of time.

Both Leon and Siria are mentioned as being the guardian(s) of the palace. 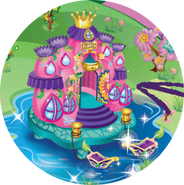 Add a photo to this gallery
Retrieved from "https://filly.fandom.com/wiki/Star_Palace?oldid=16606"
Community content is available under CC-BY-SA unless otherwise noted.