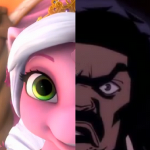 My Little Life on Mars

Okay, so Wikia told me one of the site tasks that add up to 100% was to make a profile page, and it wouldn't feel fair to skip it just like that, so here I am!

I came to Filly Wiki as part of a suggestion by Sothesti in which a recently discovered barely-tapped source of character descriptions from the Filly Sammelband annual books, were to be translated and published on the wiki instead of on the arguably temporary Fillychan. Me and HareTrinity picked up on the challenge and did everything but translating work. After three weeks-ish, the two of us was given admin status.

Before the two of us took the challenge, there were 7 pages on the wiki. A month later, we were at 408 pages, which me having created ~70 (give or take 10) of them.

I got interested in Filly Funtasia on the day the first trailer was released, the 15th of October 2013 and has strived to keep the fandom alive near-continuously through places like Fillychan and by finding new material for Funtasia Daily. I have long experience from the My Little Pony brony experience too, but now wants to move on beyond that, despite that I had been on Ponychan's /oat/ for two years straight.

Retrieved from "https://filly.fandom.com/wiki/User:My_Little_Life_on_Mars?oldid=6491"
Community content is available under CC-BY-SA unless otherwise noted.